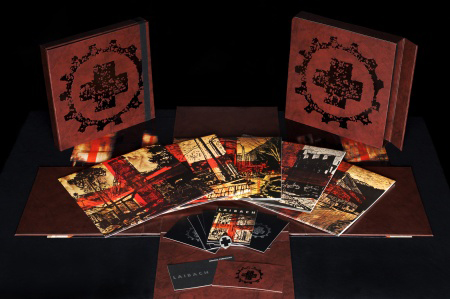 This ultra-deluxe leather-bound box set comes in a cross-like holder for the five Vinyl discs and also includes a DVD with two outstanding live-performances from 1982 and 1984 plus a large poster,10 postcards, a metal enamel-badge as well as an extensive 36-page booklet illustrated with archive photos of Laibach’s hometown Trbovlje.

The Box focusses on Laibach’s early years as a provocative performance-music-and-multimedia-group and includes early studio and unreleased recordings in combination with many legendary live-documents from the 1981-1986 period, all previously unreleased on vinyl.

Lp2 contains two performances from Ljubljana in 1982 and 1984: Side A from the Novi-Rock-Festival 1982 and Side B from December 1984 at Malči Belič Hall

Lp4 contains two performances from Amsterdam (Netherlands) in 1985, which were previously released on the Staalplaat Tape “Ein Schauspieler.”

Lp5 contains the concert in the village of “Hum” near Nova Gorica (Slovenia) in 1986 which was the first (semi)-legal concert in Slovenia after their ban in 1983. At this concert Laibach was finally able to perform again with its full name on the poster, although the ban on this remained in force until 1987. The concert was organised by the local cell of the Union of Socialist Youth of Slovenia and recorded by Ernest Žnidaršič. The concert began with Laibach cutting a large amplified log of wood and culiminated in the use of a chainsaw. This was the only show where the group used a chainsaw.

The DVD includes two more former Yugoslav live-performances from 1982 and 1984..The first is the second Zagreb-performance at YURM-Festival in December 1982 also known as Touch of Evil featuring founding member Tomaž Hostnik who committed suicide shortly after the concert as well as the legendary clandestine concert in a venue in Dom Malči Beličeve (the house of the socialist heroine Malči Belič in Ljubljana) where Laibach performed “incognito” on 21st December 1984. Zagreb performance was filmed by Šime Strikoman and used by his kind permission. Ljubljana performance was filmed by Marjan Osole – Max and used by his kind permission.

The booklet texts compiled and edited by Alexei Monroe offer an opportunity to explore and understand in detail the origins, mission, methodologies and ideologies that shaped the Gesamtkunstwerk Laibach. The texts are by Alexei Monroe, Aleš Leko Gulič, Donald Campbell, Michael Goddard and legendary Slovene music promoter Igor Vidmar.

You can order this exclusive release on the VOD shop. A few more copies are also available on Discogs.