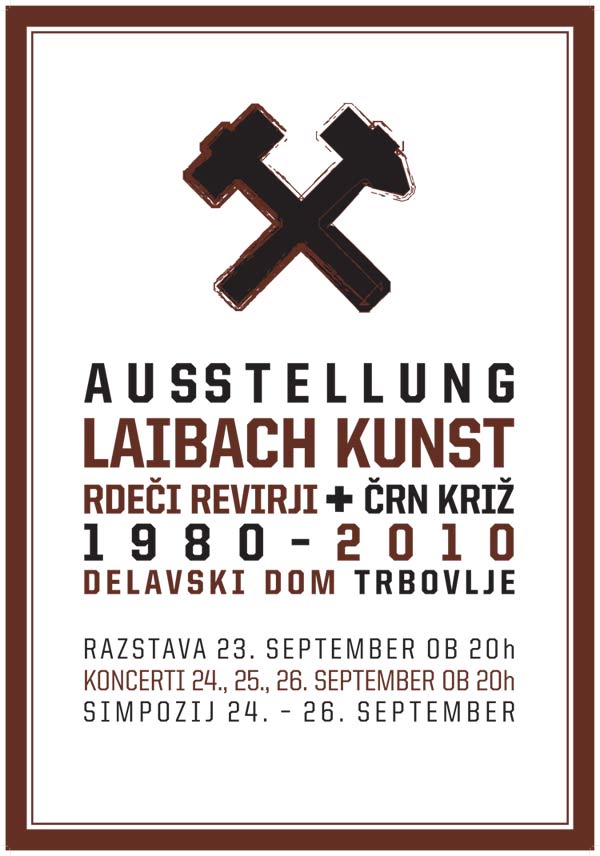 After 30 years the group Laibach returns to Delavski Dom Trbovlje, where it will carry out a multimedia action, originally banned by local authorities in 1980.

On the 27th of September 1980 the group Laibach, formed that year in Trbovlje, prepared it’s ‘coming out’ under the patronage of Ljubljana’s ŠKUC Gallery. This was its first proper live performance, and first public happening in the form a multimedia action, an event that would represent an ‘alternative to the (official, centralistic) Slovenian culture’ and would shock and awaken the Red District which was at the time slumbering, poisoned and saturated by soc-realism and provincialism, with its brutish and avant-garde approach. The single day Blitzkrieg event was conceptualized as a poster action (night postering of Trbovlje), a concert of anarcho-industrial music (featuring Laibach, Kaos and Berlinski zid) and as an exhibition of paintings, collages, graphics and short films (Ausstellung Laibach Kunst).

Even though the local authorities banned the entire event before its opening, and although of the entire planned event Laibach only managed the night postering action, it proved to be a perfect success as this event which never happened and it’s banning caused a number of controversial discussions within the the nascent Slovene civil society, selected print media (Mladina, Tribuna) and radio (Radio Študent). Such was the birth of Laibach into the Slovene and Yugoslav reality of the 1980s.

30 years after the incident, Laibach returns to the scene of the crime and is preparing a partial reconstruction – a new multimedia happening in its birthplace. This multi-day event will retrospectively address the same contextual and formal parameters active in the 1980s. In the light of the temporal distance and the new socio-political paradigm of the present, this action will generate and assume new meanings and interpretations which will continue to reverberate for some time.
Programe:

23rd of September at 20:00 – Opening of the spatial installation RED DISTRICT + BLACK CROSS in the lobby of Delavski dom Trbovlje. The exhibition will run until October 20th 2010. Side event: exhibition DOCUMENTS 1980 will be set in the Slavček (Choir Nightingale) room of Delavski dom. Laibach Kunst will also carry out some spatial interventions in the surroundings of Cementarna Trbovlje (Lafarge), Termoelektrarna Trbovlje Power Station (TET II) and the TV broadcasting tower on Mount Kum.

24th and 25th of September at 20:00 Laibach will perform two concerts in the theatre hall of Delavski dom Trbovlje and on 26th of September the group will also perform a J.S. Bach inspired showLAIBACHKUNSTDERFUGE on Mount Kum.

24th, 25th and 26th of September a three day Red District Symposium (‘Past Perfect – Future Tense’)will take place in Delavski dom. This international seminar aims to review the events since the appearance ofLaibach 30 years ago, key moments in Laibach’s development, the history of Neue Slowenische Kunst and the development of the NSK State.