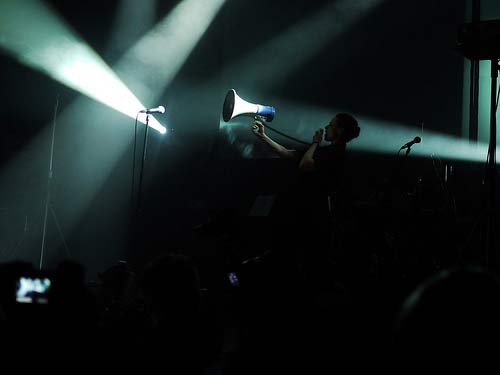 As part of its third leg on its “Revisited” tour, Laibach performed on 14 May 2011 at the 2-day Short Circuit Electronic Music Festival in London’s cult-venue Roundhouse, where bands such as Pink Floyd, The Doors, Jimi Hendrix Experience and the renowned radical theatre group The Living Theatre gave historical performances in the 1960s. Laibach took the mainstage on the third and final day of the festival, following bands such as The Liars, The Residents and Erasure with guests Alison Moyet and Feargal Sharkey. Before and after Laibach, Andy Fletcher and Martin Gore from Depeche Mode played DJ sets on the same stage. At the end of their set, Laibach played a cover version of the legendary hit “Warm Leatherette”, which more than 30 years earlier marked the beginning of the label Mute Records, the host of the festival.

A video clip from the concert.