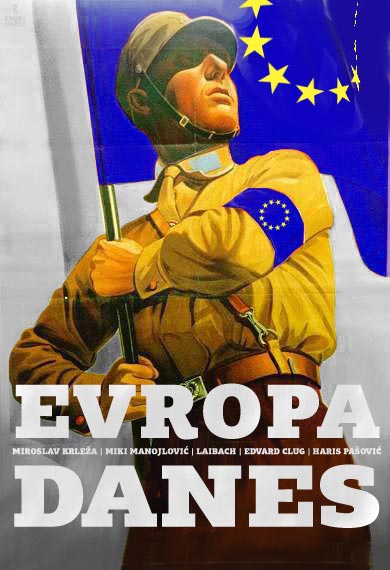 In one of the biggest coproductions in the South East Europe in years, the East West Theatre Company Sarajevo together with the largest theatre in Slovenia – Slovenian National Theatre, Maribor and European Cultural Capital 2012 Maribor have produced a new show, titled “Europe Today”, based on the text of Miroslav Krleža and directed by Haris Pašović in collaboration with some of the finest artists in the region: Miki Manojlović, an actor; Edward Clug, a contemporary dancer and choreographer and the neoclassical industrial group Laibach. The dramaturge of the production is Dubravka Vrgoč. These artists come from Slovenia, Bosnia and Herzegovina, Serbia and Croatia.

Has been an European idea defecting Europe? What is the view on Europe of this artistic all-star line-up coming from South East Europe, both a dramatic and fascinating European region? Miki Manojlović plays this show with an anger, poignancy and vulnerability comparable to Lenny Bruce. Manojlović matches on stage the energy of the band Laibach performing live their dark, yet exhilarating music. Edward Clug, a virtuoso contemporary dancer, plays his solos with uplifting strength and tender softness. An expressive video contributes a powerful visual universe to this awakening show.

Miroslav Krleža is the greatest Croatian writer ever. In 1935 he wrote a famous essay “Europe Today,” which in 2011 appears to us as shockingly contemporary! In his words, our Europe shows up naked with no place to hide. 75 years has passed since he wrote his impeccable analysis of Europe and yet, it doesn’t seem that much has changed in the deepest European social, political and metaphysical matrix.

Haris Pašović has been one of the leading theatre directors in the South East Europe for more than two decades. While some of his productions remain as the landmarks in the theatre of the former Yugoslavia, his current work “Class Enemy”, “Football, Football”, “Hamlet”, etc.) have been acclaimed worldwide (Edinburgh International Festival, Napoli Teatro Festival Italia, Singapore Arts Festival, National Arts Festival of South Africa, etc). During the siege of Sarajevo (1992-95) Pasovic spent most of the time in Sarajevo directing the MES International Theatre Festival. In 1993, he organized the first Sarajevo Film Festival called “Beyond The End Of The World”. He also produced several shows, among others “Waiting for Godot”, directed by Susan Sontag in 1993 in the besieged city. Pašović is a director of the East West Theatre Company, Sarajevo.

Miki Manojlović is considered by many as one of the greatest actors of all times in the Balkans, an European actor internationally acclaimed (European Film Academy Award, 2007 Best Actor – Nominee; Best Actor – 2010 Gotham Screen Film Festival, New York. He used to work with the directors such as Peter Brook, Danis Tanović, Sam Garbarski, Jean-Jacques Beineix, Haris Pašović, Jérôme Salle, Emir Kusturica, Stefan Komandarev and many others).

The music and additional text in the show is performed live by Laibach, a Slovenian retro-avant-garde band. In their music they successfully combine the industrial, neoclassical and martial elements creating an original, highly spirited works. They have been among the most controversial artistic groups in Europe for decades, often provoking heated debates. They have been accused both by the far left and far right for being too extreme. Laibach was banned a couple of times in the former Yugoslavia as well as in parts of Europe. The popular German band Rammstein has acknowledged that they have been hugely influenced by both the aesthetic approach and material of Laibach. Laibach are joined on stage by beautiful and electric Mina Špiler, frontwomen of the band Melodrom.

Dubravka Vrgoč is considered one of the finest dramaturges in the Balkans. She is also a director of the today’s most successful Croatian theatre – ZKM.

The visual film & design team Nejaaka, the rising stars of the Slovenian design, are creating impressive film projections for the production, joined by Sašo Podgoršek, one of the most influential Slovenian video director, who also contributes his high-octane videos for some of the Laibach songs.